For a long time, Mealbeatz was the only female producer who could regularly land hits in the German hip-hop scene. In Germany, she established her reputation as the producer of Kool Savas as he was in his early stages of his career. Followed by projects with Haftbefehl, Curse, or Jan Delay as well as internationally with Kanye West, Mobb Deep, etc. In the hip-hop media, Melbeatz is known as an award-winning icon. For several years now, she’s been spinning turntables nationally and regularly filling up clubs. 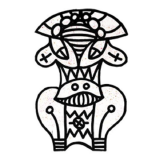