Alex Gallus has been an integral part of Berlin’s music scene for over three decades. In the 90’s, many of today’s DJ’s bought their records in his legendary record store “Such a Sound”. Through his roots HipHop, R&B and Dancehall, he has come to Deep House and Electro, and serves with his repertoire several scenes on a sophisticated level. Alex has played everywhere in Berlin. Every time a new club opens, it’s just a matter of time until his phone rings. Own event formats: The What, Heartbreaks & Promises, The Red Parrot. 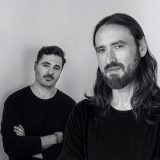